Jay Geils was very fond of my painting of Robert Johnson; he had received a print from a mutual friend and he contacted me to discuss creating a painting of himself with a car from his collection.

We met on a bright sunny day at his home north of Boston and our mutual love of Jazz, Blues, cars and guitars prompted lengthy lively conversation. He showed me his fabulous car collection, and his music den of memorabilia- particularly relating to his Blues heroes that he toured with later in his life. Jay chose his 1961 Ferrari and his “Charlie Christian” Gibson guitar for our fun photoshoot at a hilltop near his home. I sent him sketches based on the various poses, he settled on one and the painting got underway, the only change prior to finish was to add the trumpet which he had picked up playing again.

The background scene was his choice of a farm that he used to own. It was a fun commission as he trusted my creative instincts, and afterward he commissioned a painting of his guitar hero Charlie Christian, with a future plan to render a painting of his other hero T-Bone Walker. Jay was one of the kindest people I have had the unexpected pleasure of getting to know later in life. 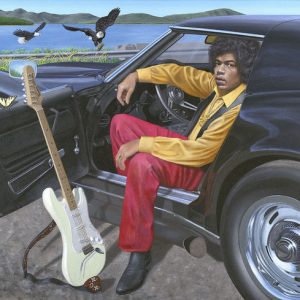