During 1968 & 1969 as a teenager I saw Janis Joplin in concert three times- Fillmore East in NYC (with Big Brother & the Holding Company), Yale Bowl, and Woodstock. Janis was living in San Francisco when in December 1968 she bought a used 1965 Porsche 356. She paid Dave Richards (artist & roadie for the band) $500 to paint artwork on the car. A few years ago I became interested in doing a painting combining my portrait & auto theme and I felt that I needed to widen my awareness of Janis as a person beyond my youthful impression of a bawdy-bluesy stage performer.

I read a number of books and watched the clips of her interviews on the Dick Cavett Show, along with press interviews taped during her road tours. What struck me was her sweetness and youthful charm, her love of her family, and her adoration for the singers who influenced her in song repertoire & style. She was a girl who left Port Arthur Texas and who blossomed in the powerful blending of Blues and Rock during the cultural revolution of the 1960’s.

I felt that this portrait needed to honor not only Janis but Black musicians on whose shoulders she stood and whom she had a deep respect for. The painting features albums of artists she cited, and the Billie Holiday autobiography book that she read as a teenager. Her beloved dog George accompanied her around the Bay Area and rode in the Porsche, notably on her drives in and out of the city after she bought a house in Marin County. The background scene is the panoramic view from the heights of the National Seashore Park. Acrylic on Canvas. 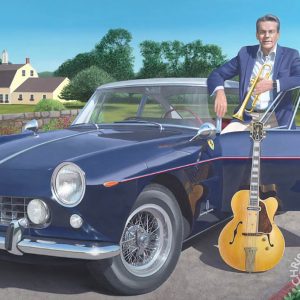