An Acrylic on canvas, completed by Bryan Ferry in 1967, and has been in a Private collection since around 1970

Bryan Ferry’s fame through Roxy Music and his subsequent solo career has brought him international notoriety. He is an incredibly talented gentleman and was destined to have a career as an artist. He studied at Newcastle University und Richard Hamilton and some of his works were included in the Tate Gallery Exhibition 12th March – 19th April 1970.

This particular collection of works were purchased directly from Bryan Ferry around 1970 and were sold to fund his Studebaker registration no 54 EXO.

Luckily these paintings survive we are unsure of the fate of the Studebaker.

Shortly after his stint at Newcastle University he began performing with Roxy Music and the rest his history, however this makes these Richard Hamilton influenced pieces incredibly rare and valuable.

This piece has Bryan Ferrys signature on the reverse, and the hanging instructions 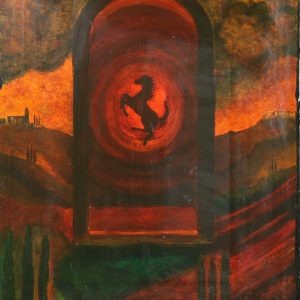